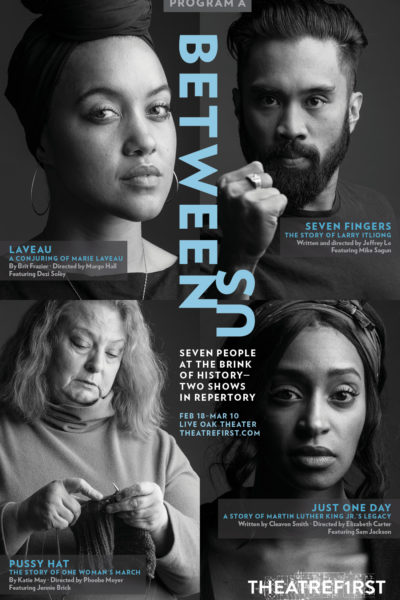 Next, for our third and fourth productions, TheatreFIRST gives you BETWEEN US, seven solo plays split into two presentations in repertory. BETWEEN US invites you to meet a leader of the Delano Grape Strike, a woman attending her first protest, a voodoo queen, the Uruguayan woman who will fight her government to get justice for her murdered sister, a black woman contemplating the first MLK day, a US general who foils a coup on Roosevelt and one of the woman who led the redress movement for the over 100,000 Japanese Americans incarcerated during WWII.

LAVEAU: A Conjuring of Marie Laveau
By Brit Frazier
Directed by Margo Hall

SEVEN FINGERS: The Story of Larry Itliong
Written and directed by Jeffrey Lo

PUSSY HAT: The Story of One Woman’s March
By Katie May
Directed by Phoebe Moyer

LA PROFESORA: The Story of Nibia Sabalsagaray
Written and directed by Noelle Viñas

THE RACKET: The Story of Smedley Butler
By James Tracy and Jon Tracy
Directed by Robert Parsons

TURNING THE PAGE: The Story of Aiko Herzig-Yoshinaga
By Jeanne Sakata
Directed by Jeffrey Lo