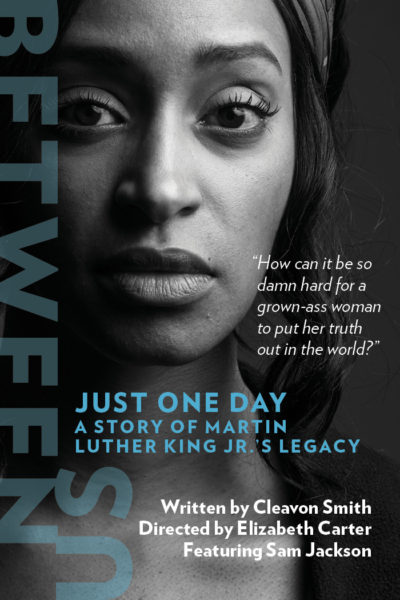 “How can it be so damn hard for a grown ass woman to put her truth out in the world?”

The day before the first official observation of Martin Luther King Jr. Day, a working wife and mother of two contemplates what the holiday means for both white and black people in a rural Southern town.

Cleavon Smith graduated from the US Naval Academy and Mills College. He is the writer of Vs., produced by TheatreFirst in their 2016-17 season. His short plays have been featured in the 2012 Best of PlayGround and the 2015 Ohlone College Playwrights Festivals. He lives in Oakland and teaches in the English department at Berkeley City College.

Elizabeth Carter most recently had the pleasure of directing Bondage for AlterTheatre. She has directed for the California Shakespeare Theater Conservatory for nearly 20 years including Richard III, The Winter’s Tale, As you Like It, The Tempest, Macbeth, and Much Ado about Nothing. Currently she is the Shakespeare and Voice Artist in Residence for the Ruth Asawa School of the Arts (SOTA) Theater Department. While Managing Director of Oakland Public Theater she also directed Motherlove by August Strindberg. As an actor Elizabeth has appeared in numerous Bay Area theaters including California Shakespeare Theater, Marin Theatre Co., Aurora Theatre Co., SF Shakespeare Festival, The Magic Theatre, San Jose Stage, and TheatreWorks. She is a SFBATCCO award recipient for Trouble in Mind at the Aurora Theatre Co.

Sam Jackson is a San Francisco based actor, vocalist and teaching artist making her TheatreFirst debut in Just One Day! Her most recent acting credits include: Aurora Theatre Company’s “Splendour”, 6 New Play’s “That It All Makes Perfect”, and Berkeley Playhouse’s “Bridges: A New Musical”. As a vocalist, Sam can be found performing with her funk/soul band The Gentlemen Amateurs (www.thegentlemenamateurs.com) all over the Bay. Sam is also proud to be the musical director of Handful Players, a non-profit organization that teaches musical theatre in San Francisco’s Western Addition.  She would like to extend a huge thank you to: her friends and family, for their constant love and support, and to you for being supporters of the Arts in this time when we need you most