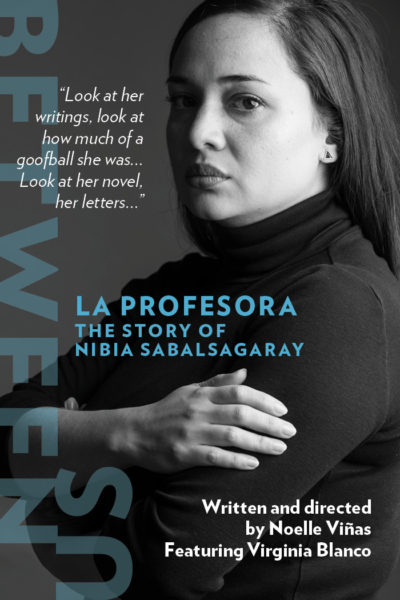 LA PROFESORA: The Story of Nibia Sabalsagaray
Written and directed by Noelle Viñas

“Look at her writings, look at how much of a goofball she was… Look at her novel, her letters…”

Nibia Sabalsagaray, a brilliant literature student, was brutally tortured and murdered at 24 by the military government that ruled Uruguay in the 1970’s. Nearly 36 years later the government finally acknowledges her death, but only after her sister brings suit.

Noelle Viñas was born in Montevideo and grew up in the DC Area. She is the product of two Uruguayan English teachers who fell in love while teaching together. In 2015, she moved to SF to co-direct and co-write the original play Apocalypse, Please with Kevin Vincenti, which closed at PianoFight in April 2017. Beforehand, she led the theatre department at Annandale HS alongside Theater Without Borders, an NEA-sponsored program for ESOL students. An Emerson College alumna, she was a Creative Producer with ArtsEmerson, an Allen Lee Hughes Community Engagement Fellow and teaching artist at Arena Stage, and a Production Intern at the GALA Hispanic Theatre. Most recently, she played “Katchen” in Black Rider with Shotgun Players as directed by Mark Jackson. She’s currently a resident playwright at Playwrights Foundation and a company member with Ubuntu Theater Project. Thanks to Jon for making space for a difficult story to be crafted, Amy for helping me listen closer to this character, and Kevin for sharpening the blade.

Virginia Blanco is thrilled to make her TheatreFirst debut. Originally from Argentina, Virginia has performed in Spanish in both classic and contemporary plays. Also, she is a founding member of Drakma Grupo Teatral, a community theater group. Most recent regional theater credits include Aria’s (Orinda Starlight Village Players), The Grapes Of Wrath (Ubuntu Theater Project), The Last Days of Judas Iscariot (Shelton Theatre), and the staged reading of After Orlando (Brava Studio Sessions) and ReproRights 2017 (3Girls Theatre). Among her film credits are the short-films Ghost Town (post-production), Missing (2017), and Guardian (2018). Currently, she is studying drama at Studio ACT (American Conservatory Theater) and Berkeley REP Theatre School.