The personal is political in seven intimate portraits over two programs in repertory.

BETWEEN US: PROGRAM A

BETWEEN US: PROGRAM B

BETWEEN US: PROGRAM A 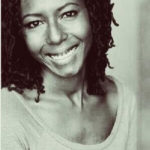 LAVEAU: A Conjuring of Marie Laveau 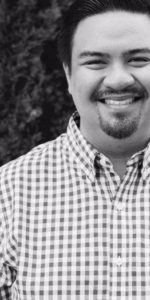 Written and directed by Jeffrey Lo PUSSY HAT: The Story of One Woman’s March

By Katie May (Top) 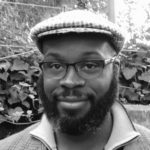 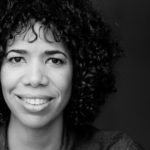 BETWEEN US: PROGRAM B

Written and directed by Noelle Viñas 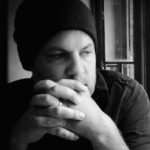 THE RACKET: The Story of Smedley Butler

By James Tracy and Jon Tracy TURNING THE PAGE: The Story of Aiko Herzig-Yoshinaga

Berkeley, CA (Updated February 14, 2018) – TheatreFIRST continues its 2017-18 season with a production too large to fit into a single night: BETWEEN US, a collection of seven plays by different playwrights and directors split into two separate programs, features a diverse array of intimate portraits that spotlight historical figures and everyday people at historic moments in time. BETWEEN US previews February 17 and opens February 18, alternating Program A and Program B through March 10, performed at TheatreFIRST’s home, Live Oak Theater in Berkeley. On Saturdays and Sundays, both programs will be presented, one at a matinee, the other in the evening. Discounts are available for patrons who choose to see both programs.

Each of the seven plays focuses on a person connected to significant moments in history; five of those people are real figures from the relatively obscure to the well-known, while the other two could easily be your neighbors. BETWEEN US invites you to meet a leader of the Delano Grape Strike, a woman attending her first protest, a voodoo queen, the Uruguayan woman who will fight her government to get justice for her murdered sister, a black woman contemplating the first MLK day, a US general who foils a coup on Roosevelt and one of the women who led the redress movement for the over 100,000 Japanese Americans incarcerated during WWII.

“This season, we’ve been saying we break space to make space,” says Jon Tracy, TheatreFIRST’s artistic director and the co-writer of one of the plays. “With BETWEEN US, we’re radically changing the way a play is presented in order to make room for a wide variety of voices that aren’t usually featured on stage.”

Program A of BETWEEN US includes Just One Day, a story of Martin Luther King Jr.’s legacy by Cleavon Smith, directed by Elizabeth Carter; Pussy Hat, the story of one woman’s march by Katie May, directed by Phoebe Moyer; Seven Fingers, the story of Larry Itliong written and directed by Jeffrey Lo; and Laveau, a conjuring of Marie Laveau by Brit Frazier, directed by Margo Hall.

TheatreFIRST seeks to revolutionize the intersection of audience, artist and activism. Now an all in-house development company, our staff, board, and creative teams are built to explore how best to lift and amplify marginalized stories. Making theatre a place where social justice happens means breaking down perceived barriers so that we might all explore an equitable world.

At A Glance:
TheatreFIRST presents BETWEEN US

PROGRAM B:
La Profesora written and directed by Noelle Viñas
The Racket by James Tracy and Jon Tracy, directed by Robert Parsons
Turning the Page by Jeanne Sakata, directed by Jeffrey Lo

At A Glance:
TheatreFIRST presents BETWEEN US

PROGRAM B:
La Profesora written and directed by Noelle Viñas
The Racket by James Tracy and Jon Tracy, directed by Robert Parsons
Turning the Page by Jeanne Sakata, directed by Jeffrey Lo

Tickets and further info available through website: theatrefirst.com and at the door. 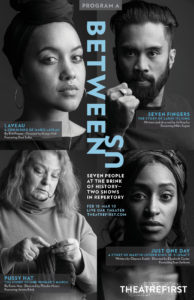 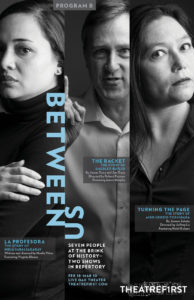