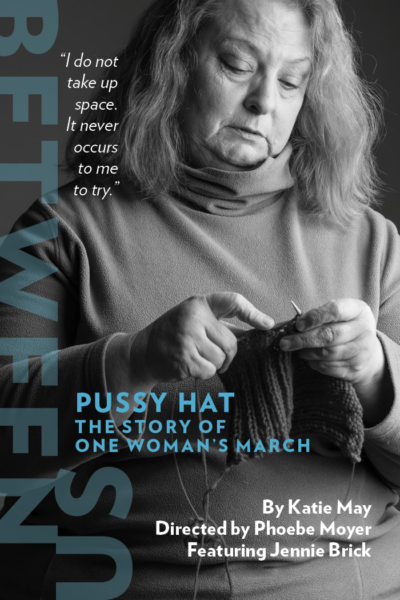 PUSSY HAT: The Story of One Woman’s March
By Katie May
Directed by Phoebe Moyer

“I do not take up space. It never occurs to me to try.”

One middle-aged white woman attends a protest march for the first time in her life. Good intentions meet the reality of a lifelong absence from activism.

KATIE MAY’s full length plays include Abominable (PlayGround/Symmetry Theatre Company, San Francisco; The Lark Playwrights Conference, NYC; commissioned by SF PlayGround), Manic Pixie Dream Girl (fringeNYC, A.C.T. Costume Shop, San Francisco, commissioned by SF PlayGround), Black Sheep Gospel (Great Plains Theater Conference), A History of Freaks (Finalist David Mark Cohen Award in Playwriting), and Secrets of Gardenias (Piper Center New Play Development Fellowship). Her short play Rapunzel’s Etymology of Zero (Best of Playground Festival, Short + Sweet Sydney) was published in the Best of PlayGround Anthology, 2011, and was subsequently made into an animated short film that screened in festivals both nationally and interntationally. May has been a member of the San Francisco PlayGround Writers Pool since 2008, and a PlayGround Playwright in Residence since 2014.  Her work has received productions in San Francisco, New York, Chicago, Arizona, Idaho, and Sydney, Australia. May is the recipient of grants and fellowships from the Virginia Piper Writing Center, National University of Singapore, Women in Film LA, and a two-time SF PlayGround E-merging Writers Award winner. She holds an MFA from Arizona State University.

Jennie is delighted to be back on the TheatreFIRST stage after playing Leonata in Much Ado About Nothing at John Hinkle Park in the summer of 2015. Working with Phoebe Moyer and Katie May has been a complete love fest and one more reminder of why theatre is a beautiful place to be. Other recent roles includeAdlean in Barbeque (SF Playhouse), Mrs. Potts in Beauty and the Beast, Yente in Fiddler on the Roof (Berkeley Playhouse), Nurse in Romeo and Juliet, Eugenie and Judge in Ondine at Sutro (We Players), Mattie Fae in August: Osage County (Contra Costa Civic), Liz in The Book of Liz, Luella in Why Torture is Wrong (Custom Made Theatre), Silda in Other Desert Cities, and Thelma in ‘night Mother (Stray Dog Productions) to name a few. You can see Jennie next in Jeeves Intervenes at Sonoma Arts Live and Hecuba/Helen with Stanford Repertory Theatre. By day Jennie is a voice and on-camera actor as well as a nonprofit finance guru! Love and thanks to B, as always. This one is for mom.