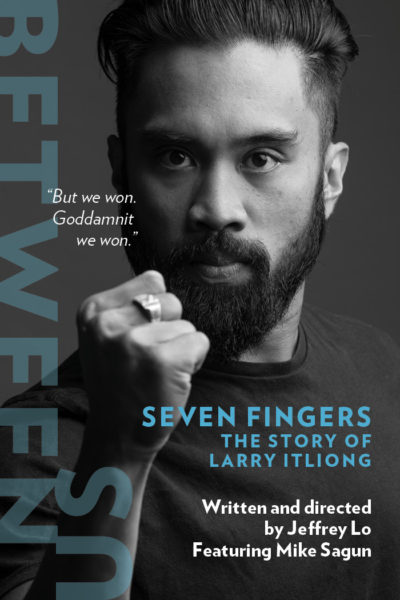 SEVEN FINGERS: The Story of Larry Itliong
Written and directed by Jeffrey Lo

“But we won. Goddamnit we won.”

Larry Itliong’s journey from young immigrant to father of the Delano Grape Strike that spurred the formation of the United Farm Workers.

Jeffrey Lo is a Filipino-American playwright and director based in the Bay Area. He is the recipient of the 2014 Leigh Weimers Emerging Arist Award, the 2012 Emerging Artist Laureate by Arts Council Silicon Valley and Theatre Bay Area Director’s TITAN Award. His plays have been produced and workshopped at The BindleStiff Studio, City Lights Theatre Company and Custom Made Theatre Company. His play Writing Fragments Home was a finalist for the Bay Area Playwright’s Conference and a semi-finalist for the O’Neill Playwright’s Conference. Recent directing credits include Yellow Face and Dead Man’s Cell Phone at Los Altos Stage Company, Uncle Vanya at the Pear Theatre (BATCC nomination for Best Production), Eurydice at Palo Alto Players (TBA Awards nomination for Best Direction), Some Girl(s) at Dragon Productions and The Drunken City at Renegade Theatre Experiment. Jeffrey has also worked with the Oregon Shakespeare Festival, San Jose Repertory and is a company member of Ferocious Lotus Theatre Company and SF Playground. He is the Casting Associate and Company Manager at TheatreWorks Silicon Valley, a graduate of the Multicultural Arts Leadership Institute and a proud alumnus of the UC Irvine Drama Department. For more, visit www.JeffreyWritesAPlay.com

Mike Sagun is proud to be making his second appearance at TheatreFirst. He made his debut in Lauren Gunderson’s Fire Work. For the last 10 years of his career he has been a teaching artist at Kaiser Permanente’s Educational Theatre. And has done work with Magic Theatre (Dogeaters) and NCTC (RnJ). Mike is a proud Bay Area native and Oakland resident. Jefferey Lo put a lot of heart into Seven Fingers and Mike applauds him for taking on the responsibility and bringing awareness to Filipino-American history. He is honored to portray the legendary activist, Larry ‘Seven Fingers’ Itliong. Mike is currently helping people get unstuck in their lives as a personal development and career coach. And he hosts Men’s Retreats called “The Authentic Man” in California, which focuses on bringing men together to share stories and be in community. His purpose in life is to create spaces for people to think deeply about themselves and live authentically. Head to his website (www.mikesagun.com) to check out the TEDx Talk he gave in Pasadena, where he talks about the power of listening and the importance of being a trusted adult for young people. And he recently spoke at TFCU Talks Davis, an event to connect, inspire, and empower Filipino-American millennials in helping them realize their full potential in relation to their cultural identity. The theme of the talk was “Embracing Identity”. Mike sends great gratitude to Jon Tracy and the T1 crew. And to JLo for trusting in him with his work. This piece is dedicated to his husband and his rescue, Bert, all the Filipino migrant farmworkers and to his ancestors, “without my grandparent’s hard work to raise ambitious children, children who wanted to create a good life for their children, I wouldn’t have the privilege of stepping on this stage and living the life of my dreams.” Follow his work on Instagram: @mike.sagun.