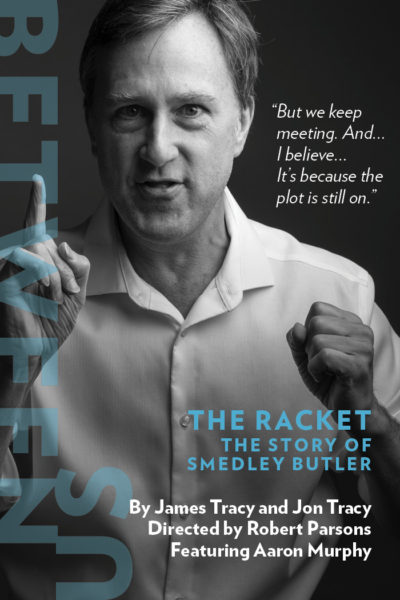 THE RACKET: The Story of Smedley Butler

By James Tracy and Jon Tracy
Directed by Robert Parsons

“But we keep meeting. And… I believe… It’s because the plot is still on.”

Smedley Butler was one of the highest decorated US Marines in history. In 1933 he revealed to a congressional committee that wealthy industrialists had recruited him to lead a military coup seeking the overthrow of President Roosevelt.

James Tracy is an Adjunct Instructor in the Labor and Community Studies Department of City College of San Francisco. He has over 26 years of experience organizing for economic justice in the San Francisco Bay Area.  In 1992, he cofounded the Eviction Defense Network and the San Francisco Community Land Trust. He has guest-lectured extensively in both academic and community settings including Virginia Tech, John Jay College of Criminal Justice and UC Fullerton.

Among the many books, anthologies and publications he has authored is his most recent book, “Dispatches Against Displacement: Field Notes from San Francisco’s Housing Wars.” He is the co-author of Hillbilly Nationalists, Urban Race Rebels and Black Power: Community Organizing in Radical Times.

Aaron Murphy acts, directs, teaches, and produces theater throughout the Bay Area. He appeared in Participants as Steven in Eve & Steven, Lure in A Sure Cure Lure Story, and Aaron in A Hole in the Shape of a Play. Other acting credits include Seascape at Role Players, The Pillowman with Breadbox, The Foreigner with Contra Costa Civic Theater, The Iceman Cometh and Hughie at the O’Neill Foundation, Jerusalem and Seven Days at SF Playhouse, Arms and the Man and To Kill a Mockingbird at Center Rep, Doubt with the Drama Association of Rossmoor, Oleanna, Here, Private Eyes, Ashes to Ashes, and Afterplay with Spare Stage, Hedda Gabler and Uncle Vanya with Actors Ensemble of Berkeley. In 2015, he received a TBA Award for Best Featured Actor for The Foreigner. He graduated from U.C. Santa Barbara with a BFA in Acting. In September, he will be in Hughie at the Eugene O’Neill Festival in Danville.