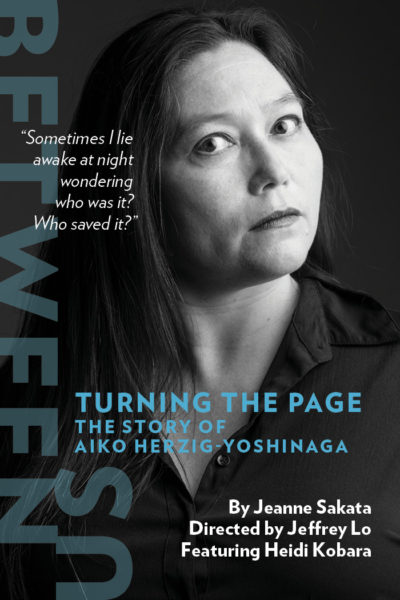 TURNING THE PAGE: The Story of Aiko Herzig-Yoshinaga

“Sometimes I lie awake at night wondering who was it? Who saved it?”

Who brings justice within reach? Aiko Herzig-Yoshinaga played a crucial role in the redress movement for the over 100,000 Japanese Americans incarcerated during WWII. She discovered, distributed and compiled research in a report called Personal Justice Denied that illuminated the concentration camps as premeditated governmental misconduct making reparations possible.

Jeffrey Lo is a Filipino-American playwright and director based in the Bay Area. He is the recipient of the 2014 Leigh Weimers Emerging Arist Award, the 2012 Emerging Artist Laureate by Arts Council Silicon Valley and Theatre Bay Area Director’s TITAN Award. His plays have been produced and workshopped at The BindleStiff Studio, City Lights Theatre Company and Custom Made Theatre Company. His play Writing Fragments Home was a finalist for the Bay Area Playwright’s Conference and a semi-finalist for the O’Neill Playwright’s Conference. Recent directing credits include Yellow Face and Dead Man’s Cell Phone at Los Altos Stage Company, Uncle Vanya at the Pear Theatre (BATCC nomination for Best Production), Eurydice at Palo Alto Players (TBA Awards nomination for Best Direction), Some Girl(s) at Dragon Productions and The Drunken City at Renegade Theatre Experiment. Jeffrey has also worked with the Oregon Shakespeare Festival, San Jose Repertory and is a company member of Ferocious Lotus Theatre Company and SF Playground. He is the Casting Associate and Company Manager at TheatreWorks Silicon Valley, a graduate of the Multicultural Arts Leadership Institute and a proud alumnus of the UC Irvine Drama Department. For more, visit www.JeffreyWritesAPlay.com

Heidi Kobara is a native to the Bay Area.  Her American born Japanese grandparents were relocated from Watsonville CA to the Poston AZ Internment Camps.  While in the camps her grandfather served in the Military Intelligence Service and because of Mrs. Aiko Herzig-Yoshinaga’s tireless research, received the Congressional Medal of Honor.  Heidi graduated from NDNU with a MFA in music and from SCU with a BA in theatre.  Her past roles have included: Hermione in Foothill College’s Production of A Winter’s Tale, Meg in Leading Ladies at BusBarn Theatre, and Forgiveness from Heaven in City Lights production of The Waiting Room.