A Co-Production with Shotgun Players

What do women owe each other?

Far, Far Better Things tells the tale of two women – Pilar, a Latina domestic worker, and Zoe, a young South Asian doctor – separated by class, race and the unspoken rules of modern womanhood. During a political period not unlike our own, the two women struggle to balance their responsibilities to their children, to themselves, and to each other. In the end they must decide if they are on the same or different sides of the struggle. 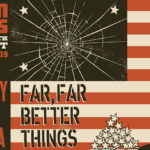