Elaine Magree has written, directed or performed at The Marsh, The Magic Theatre, California Shakespeare Festival, Z Space, The Working Women’s Theatre Festival, Brava, The Exit Theatre, The People’s Theatre Festival, The National Women’s Theatre Festival and The Minneapolis, Winnipeg and Victoria Fringe Festivals. She taught theatre at Solano College, SF City College, East Bay Center for The Performing Arts and in homeless shelters, recovery centers, and the Sacramento county jail. Her piece Holding the Edge was nominated for TBA best solo show of the year and was recognized with a Sui Generis 2016 Achievement Award.  PussyGrabbeerRevenge is in development as her third solo, or possibly, ensemble piece. Sometimes a wave, sometimes a photon: you can’t be in two places at once, or can you?

Skyler Cooper is thrilled to be performing at TheatreFIRST. Skyler has worked with Crowded Fire Theater, B Street Theater, SF Playhouse, California Shakespeare company, Faultline Theater, Impact theater, and various other companies around the bay area with a strong appetite for gender-bending characters roles.  He has gone from playing Othello the moor (Director, Melissa Hillman) to Queen Margaret ( Director,Jon Tracy). He took some time off from theater to write, produce and direct his award-wining short film HERO MARS about gender-stereotypes in the world of classical theater actor. Skyler trained in acting with Phil Bennett Lab, A.C.T. and a summer internship with the California Shakespeare Company.  Always gratitude for this moment…you for being here with us…and for what art can do! 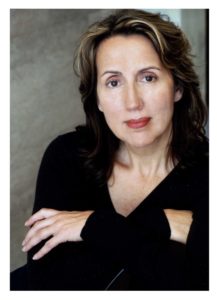 Ms. Lozano is a Bay Area based Director, Actress and Educator. She was a Resident Artist with the American Conservatory Theater, (ACT), for 15 years, where she served as a core faculty member and director in the MFA Program, a director and teacher in the Young Conservatory and Studio ACT Programs, and as the resident director of the main stage production of A Christmas Carol.  Other directing work at ACT includes MFA Productions of Fuente Ovejuna, The Good Woman of Setzuan, Sueno, The Skin of Our Teeth, Happy to Stand, Saved, References to Salvador Dali Make Me Hot, as well as productions of Twelfth Night, Othello, and The Comedy of Errors for the Will on Wheels tour; and thirteen graduate showcases. Her work with the Young Conservatory includes the world premieres of Staying Wild book by Janet Allard, music and lyrics by Creighton Irons; Home Front book by Craig Slaight, music and lyrics by Creighton Irons; Tim Mason’s The Life to Come; Sarah Daniel’s Dust and Constance Congdon’s Nightingales; West Coast premieres of Jeffrey Hatcher’s Korczak’s Children; Wendy MacLeod’s School Girl Figure; and Darling, book by Brett Rybeck, music and lyrics by Ryan Scott Oliver.

Ms. Lozano serves on the Theatre, Dance and Performance Studies faculty at UC Berkeley, where she teaches Acting, Acting Styles and Shakespeare Scene study,  as well as directs, most recently the Fall 2018 production of Tartuffe.

Ms. Lozano was an Associate Artist with the California Shakespeare Theater, where she performed leading roles in over 20 productions, most recently the Nurse in Romeo and Juliet, Madame Arcati in Blithe Spirit, and Beatrice in Much Ado About Nothing. She also served as Master Vocal Coach on numerous productions, including Hamlet, Henry IV pts 1 and 2, Othello, the Tempest, Macbeth, The Comedy of Errors, and The Taming of the Shrew.

Additional Bay Area directing credits include The Importance of Being Earnest and The Comedy of Errors (2020) with Livermore Shakespeare Festival; Shakespeare in Love at Las Positas Theatre (2020), The Drawer Boy, Welcome Home Jenny Sutter and the critically acclaimed Orlando with TheatreFirst; The Countess with Center REPertory Theatre; Two for the Seesaw with Marin Theatre Company; Inspecting Carol and the West Coast premiere of Jane Martin’s Anton in Show Business with San Jose Stage Company; and The Norman Conquests, Holiday, The Real Thing, and She Loves Me with Napa Valley Repertory Theatre, of which she was a founding member and associate artistic director. Additional acting credits include work with the American Conservatory Theater, Berkeley Repertory Theatre, Center REPertory Company, San Jose Repertory Theatre, San Jose Stage Company, and the Oregon Shakespeare Festival.

Elaine Magree’s PussyGrabbingREVENGE is a seriously funny take on a seriously unfunny subject. A man won’t take a woman’s NO for an answer. She calls five women, who each call five women, they each call five more, and a resistance action is born. Powered by dorky jokes, Magree asks: is it revenge or justice? Susannah Martin directs.

In A One Man Show, Skyler Cooper charts his course of transformation from a Baptist minister’s daughter afraid to tell her parents she liked girls, didn’t believe in God, and desperately wished to become a man, through the death of his mother that serves as the unexpected catalyst that sets Skyler on his path toward whom he’s always been. Domenique Lozano directs, with Lisa Evans as dramaturge.

The repertory will also spotlight organizations that identify across the LGBTQIA2+ spectrum through visual installations that begin the event and community discussions that follow each performance.

History Keeps Me Awake: Queer Voices in Rep delivers on TheatreFIRST’s promise to smash traditional models, and hold ourselves to equitable representation mandates (minimum two-thirds people of color, half female identified and one-third LGBTQIA2) that don’t so much mirror the world we have, but the world we want: a coalition of humans centered in their own stories.

Single tickets and repertory packages are available now at: