THE LAST SERMON OF SISTER IMANI

It’s been six years since Adrien and Danielle have spoken. Once on the same path to hip-hop stardom, tragedy splits the longtime friends on to two very different and conflicting paths. Now, Adrien – an up-and-coming politician – needs the endorsement of Danielle – now a spiritual leader named Sister Imani – and comes to her retreat to find common ground between what they’ve both become. 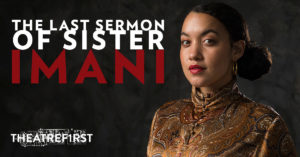