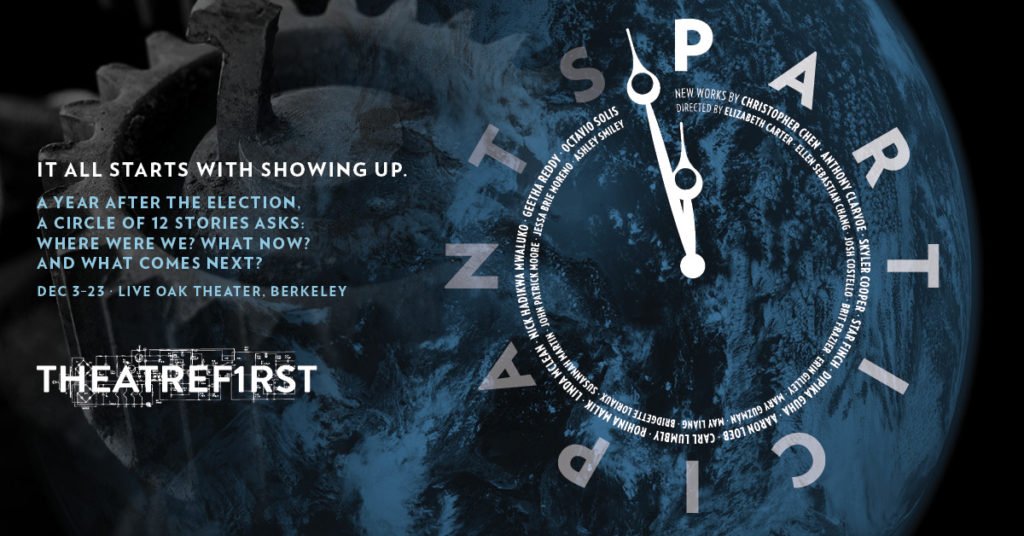 (Please arrive early, there will be no late seating.)
Live Oak Theater, Berkeley

For the second production, TheatreFIRST shifts storytelling gears with PARTICIPANTS. This theatrical exploration delves into how we individually and communally act in times of social and political unrest. The audience, sitting in a circle and led by a central emcee, will witness twelve new works that aim to incite community discussion. These pieces, written and directed by the super-team will challenge the audience to ask: where have we been, what are we doing, and where do we go now? PARTICIPANTS includes:

GODFORSAKEN
by Linda McLean and directed by John Patrick Moore

SHOW OF HANDS
by Anthony Clarvoe and directed by Erin Gilley

SHAKE IT
by Rohina Malik and directed by Bridgette Loriaux

LIVING PROOF
by Skyler Cooper and directed by Mary Guzmán

FOREST
by Christopher Chen and directed by May Liang

TAKE THE TICKET
by Star Finch and directed by Brit Frazier

EVE AND STEVEN
by Carl Lumbly and directed by Josh Costello

BREAKAWAY
by Octavio Solis and directed by Ellen Sebastian Chang